DISCLAIMER: The views presented in this article are solely those of the author, and do not represent the views, interests, or funded work of the Bill & Melinda Gates Foundation.

The first case of COVID-19 was confirmed in South Korea on Jan. 20, 2020. The epidemic reached a plateau by March 12th. WHO and others have praised Korea’s COVID-19 control, and attribute Korea’s success mostly to three factors: 1) early initiation of control efforts, 2) extensive and innovative testing strategies, 3) effective epidemiologic investigations using contact-tracing (1). These specific strategies undoubtedly contributed to Korea’s COVID-19 control. However, the publicized “lessons learned” from Korea overlook the sociopolitical and health system context that gave rise to the specific strategies and policies. To generate insights that may have a broader public health value beyond Korea, it is necessary to contextualize the policies, and identify conditions conducive to an effective pandemic response such that those conditions can be considered in other contexts. We reflect on the policy context that enabled the successful COVID-19 control in Korea.

Outcomes, intended or unintended.
COVID-19 has been contained, though tenuously, with a total of 455,032 suspected cases tested, 10,156 confirmed cases and 177 deaths as of April 4 (2). Policies were implemented to enable a system-wide emergency response (Figure 1) (3). New diagnostic tests reduced the assay time from days to less than six hours. Mobile-phone data and apps supported epidemiologic investigations through contact-tracing, and risk communication to the public by the public health authorities (3). Innovative testing strategies enabled a rapid deployment of large-scale testing of suspected cases (e.g. drive-thru testing) (4). Efficient triage helped allocate resources (e.g. hospitals, health care workers) according to the risks of developing severe disease (e.g. public or private buildings converted to the Residential Treatment Centers for dedicated monitoring and treatment for mild cases, with on-site medical staff). Hospitals were designated to have separate wards for the suspected COVID-19 cases from non-respiratory illnesses in order to minimize hospital-transmission (3). Vulnerable social groups were exposed, including the undocumented foreign migrant workers, low-income households, and workers with poor working conditions. 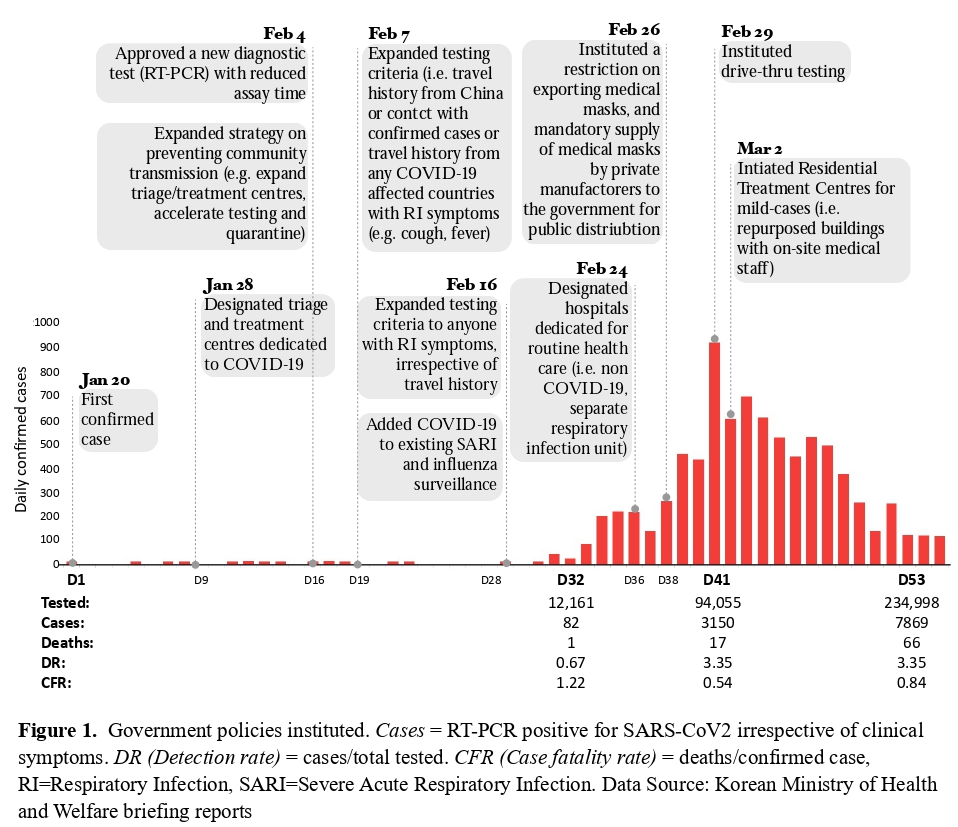 Context
The corporatist Social Health Insurance system (multiple insurers) introduced in 1977 was transformed into the publicly funded single-payer National Health Insurance in 2000 (5) owing largely to decades of democratization movements. A popular uprising impeached and imprisoned two presidents from the conservative party (Myong-Bak Lee, 2008-2013; Geun-Hye Park, 2013-2017), and elected the current government in 2017. The relatively high level of public trust in the current government must be interpreted in this context of Korea’s recent political history. South Korea ranks 46th highest in the Gross Domestic Product per capita of $39,500 and spends $2431/year/capita on health (6,7).
Pandemic influenza A/H1N1 caused 750,000 cases and 252 estimated deaths in Korea between May 2009 and August 2010 (8). Between May and November of 2015, the Middle East respiratory syndrome coronavirus (MERS-CoV) caused 186 confirmed cases and 38 deaths (9). During the MERS-CoV outbreak, the conservative government was heavily criticized by the public for delayed testing, failure to identify and isolate ‘super spreaders’, and lack of transparency in risk communication to the public. The two outbreaks triggered a rigorous public debate on the conflicting needs between protecting personal data and ensuring collective well-being during epidemics. The public demand for a system-wide reform in epidemic preparedness led to strengthening the Korean Centers for Disease Control and Prevention (KCDC), and the establishment of the provincial-level Rapid Response Teams under KCDC’s leadership. The Infectious Disease Prevention and Control Act was legislated to permit collection and sharing of personal data by the government for the sole purpose of prevention and control of infectious diseases (10). Epidemic preparedness was recognized as a core public health function after the two outbreaks, and mechanisms for the government-led response were put in place.

Reflections
Timely and coordinated response to COVID-19 in Korea was possible largely because of the system-wide strengthening of public health institutions within a strong publicly funded primary health care system. Intended and unintended outcomes highlight the need to emphasize democracy, equity and solidarity in the long-term strategies for pandemic preparedness.
First, strong leadership and transparency of the government, and active civic participation were critical in the COVID-19 control in Korea. The social contract between the citizens and the government is inherently tentative and dynamic; it must be continuously calibrated through democratic deliberation for specific policies (e.g. use of personal data for epidemic control). Second, epidemic blind spots put the entire population at risk; thus, making an equity-focus a necessity. Is a series of just-in-time emergency cash transfers sustainable or even effective in the long-run? Is there an argument for strengthening social protection floors that can proactively identify and protect the vulnerable social groups, and strengthen resilience at a systems level? Third, in times of heightened anxiety towards and scrutiny over others, can we imagine long-term strategies to avoid atomization of communities, and to strengthen social cohesion? Fractured communities with distrust towards one another are not conductive to an effective public health response to an epidemic. These questions have relevance beyond Korea.