Over the past two decades, the world has faced several infectious disease outbreaks. SARS, Ebola, Influenza A (H1N1), MERS, Zika virus, and most recently COVID-19, have all had a massive global impact in terms of economic disruption, strain on local and global public health resources – and above all, on human health. To provide insight into the role of a national public health agency in supporting the response to an outbreak, we have used SciVal and Scopus data from 1996 to 2018 to analyze scholarly output and citation impact of Canadian research on emerging infectious diseases and health security. We hope that this data and the conclusions we have drawn from it will strengthen our understanding of how research from public health agencies can support society in the face of infectious disease outbreaks.

Across the world, emerging infectious disease research has seen an average growth of 6.9% annually over the past two decades. In general, research on an infectious disease tends to spike following an outbreak. For example, Figure 1 shows the sharp increase in Ebola research publications following the 2014 epidemic. This rapid growth demonstrates the research community’s ability to respond quickly to public health needs and help countries prepare for future outbreaks. (See our Infectious Diseases Infographic for more global data and trends.)

Since the SARS epidemic of 2002-4, Canada has also increased its capacity to respond effectively to the public health challenges of serious infectious disease outbreaks. Following the recommendations of the National Advisory Committee on SARS and Public Health, several cornerstones for public health emergency response were established – including the Public Health Agency of Canada (PHAC), which is responsible for much of the research that is needed to increase national preparation for future outbreaks.

Among this type of research, the fields of emerging infectious diseases (EID) and health security, a subset of EID, play an important role in supporting planning for the next pandemic. Figures 2 and 3 show the rise in Canadian publications related to EID and health security, as well as the significant proportion produced by PHAC since its creation in 2004. The growth of publications within these research topics suggests an increased focus on the country’s public health preparedness.

Figure 2. Output from Canada and PHAC in Emerging Infectious Diseases research (with the starting year of significant outbreaks

Figure 3. Output in health security research (with the starting year of significant outbreaks labeled), which includes the analyses of policies and efforts at the surveillance of emerging diseases, plays an important role in supporting preparedness for the next pandemic.

Lessons Learned from the Past: Canada’s Response to the 2014-16 Ebola Outbreak

As the COVID-19 situation continues to develop around the world and our understanding of the disease is still limited, it may be useful to analyse the past for lessons for the future. We will explore one noteworthy Canadian example here, to demonstrate the importance of public health organizations like PHAC and the research they produce.

From December 2013 to March 2016, the Ebola outbreak had a devastating human and socioeconomic impact in West Africa and beyond. Fortunately, Canada had long been conducting research on the Ebola virus. Researchers at PHAC’s National Microbiology Laboratory, based in Winnipeg, had developed an experimental vaccine called the Vesicular Stomatitis Virus-Ebola Virus vaccine – known as VSV-EBOV – as early as 2001, although there was little interest from the pharmaceutical industry until the outbreak began (1). In August 2014, Canada exported 800 doses of the experimental vaccine to the World Health Organization, who had ruled that it was ethical to use untested vaccines on Ebola patients (2). In November, working with other government agencies, PHAC began conducting clinical trials of the vaccine (3). After over 4,000 doses had been administered to patients in Guinea, researchers concluded that VSV-EBOV had proven its effectiveness and became the first FDA-approved vaccine against the disease (4). In July 2015, this result was published in The Lancet, which described VSV-EBOV as “highly efficacious and safe in preventing Ebola virus disease.” (5). Since 2014, the Canadian vaccine has been used to immunize tens of thousands of patients in the Democratic Republic of the Congo, in both the 2018 outbreak in Équateur (6) province and the present-day outbreak in Kivu (7).

It was thanks to PHAC’s longstanding and high-quality research on Ebola that the vaccine could be developed so quickly – which is also supported by Canada’s publication data. Figure 4 shows PHAC’s critical contribution to Ebola research since PHAC started publishing it in 2005. Before the 2014 outbreak, PHAC was responsible for 63%, on average, of all Canadian publications on Ebola, and 30% after it. Figure 5 demonstrates that while Canada’s average Field Weighted Citation Impact (FWCI) – an indicator of research impact – was higher for Ebola publications than for all publications between 2014-18, PHAC’s FWCI was still significantly greater than both of these metrics. 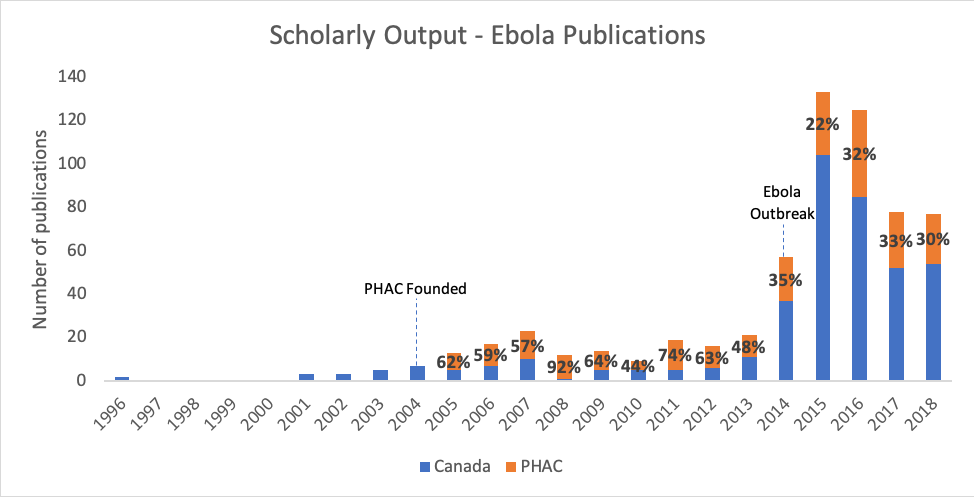 The Ebola outbreak marked the first test of Canada’s rapid response clinical trials research system. It was a success and can be applicable to other public health crises, like COVID-19, that require vaccine testing. The Ebola case study illustrates the need for continuous baseline research on emerging infectious diseases to facilitate pandemic preparedness – not just research on cutting-edge research topics – to be produced by public health institutions like PHAC, which have the mandate to support emergency preparedness (8). Unlike academic institutions and industry, public health agencies take on the crucial role of conducting this type of research. For COVID-19 and other pandemics in the future, organizations like PHAC and the crucial work they do will help increase countries’ ability to respond more quickly to outbreaks.